I read an interesting article about corvids in Australia at The Conversation. I don’t like to re-post full articles so, I will post a snippet and a link…

Corvids feature in the cave art of early humans. Their voices and actions reportedly stimulate human language and culture. Some research suggests that when humans interact with social crows, the things they see and learn can inspire their own rapid cultural evolution. Crows also seem to do things that people do (“talk” to each other, steal and hide things, use tools, “tease” other species, play), so it’s possible we’re all learning from one another.

You can read the whole article here.

A member of the corvidae family, Clark’s Nutcracker is a lovely bird slightly smaller than the Spotted Nutcracker. It eats mostly seeds from the pine tree. And it has a pouch in the floor of it’s mouth in front of its tongue (a sublingual pouch — See below) which can hold up to 95 pinyon pine seeds (depending on the seed this number can vary from 50 to 150).

To put this in perspective, 95 Pinyon pine seeds weigh up to 13% of the total weight of the bird!! How neat is that? They have a pouch in their mouth where they can store and carry almost 15% of their own weight! The Clark’s Nutcracker also has a “long, heavy, sharp bill… used for hacking open green, closed cones, many of which are covered with pitch. Nutcrackers can open the green cones of most of the pines. The bill is also used to thrust seeds into the substrate with strong japes of the head and neck. As their name implies, nutcrackers can open thick-hulled pine seeds by crushing them in their bills.” ((http://www.pigeon.psy.tufts.edu/asc/Balda/)) Most jays must wait for the cones to open naturally, but the Clark’s nutcracker (and the pinyon jay) are able to open the tightly closed green cones. Lucky for them, they don’t have to wait for a good seed.

In a year with a heavy cone crop a single nutcracker can cache between 22,000 and 33,000 seeds in over 7,000 individual cache sites (Vander Wall & Balda, 1977). Birds may place between one and 14 seeds per cache. Birds continue caching until the crop is depleted or snow covers the caching areas (Vander Wall & Balda, 1977). Possibly, birds curtail caching after snow remains on the ground because to cache in these conditions would reveal cache location by their foot prints left in the snow. ((Balda, Russell P. and Kamil, Alan C. Linking Life Zones, Life History Traits, Ecology, and Spatial Cognition in Four Allopatric Southwestern Seed Caching Corvids))

The Clark’s Nutcracker possesses a number of abilities and physical attributes that help them thrive. They have excellent spatial memory abilities which allow these clever corvids to “learn and generalize geometric rules about the placement of landmarks.” They use the landscape and even the sun (as a compass) to help them cache seeds. Their strong beaks help them crack open seeds, hence their name. Their long, pointed wings help them for strong flight to great distances. They can cache up to 22 km (a little over 13 and a half miles!). The Clark’s Nutcracker “can carry seeds 1,900 m up the side of the Peaks.” ((Balda and Kamil)) They use ‘bill-clicking’ which is the rapid opening and closing of the mandibles, to help determine if the seed is full as well as determine the thickness of the seed coat which saves time when seeds are abundant in the spring and summer.

So intelligent are they, the Clark’s Nutcracker can discern between pinyon pine seeds that have nut meet and those that are empty just by observing the color of the shell. WOW! Corvids are so intelligent!

I have been waiting so patiently, ok, maybe not so patiently, but waiting… and waiting… for John Marzluff’s new book, Gifts of the Crow: How Perception, Emotion, and Thought Allow Smart Birds to Behave Like Humans to come out. And it comes out in 6 days! You can officially order it on Barnes and Noble today! I just did! YAY! I am chomping at the bit to get my hands on this book! I cannot wait! Hip! Hip! Hooray! 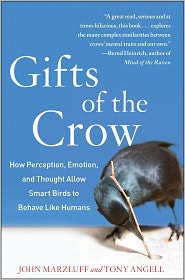 As soon as I get it and read it, I will write up a thorough review for you here on CorvidCorner.com. =)

If men had wings and bore black feathers, few of them would be clever enough to be crows.

Maybe the truth is somewhere in between.

You might have heard of this fellow, John Marzluff. He is a professor at the University of Washington who studies crows. He is the one who led the research with the ability of facial recognition by crows. If you haven’t read it, you can read it here. Yes, crows can recognize a person’s face and teach other crows to learn it as well. They have an elaborate way of communicating, one we cannot comprehend YET! =)  John Marzluff has written a few crow related books (one will be released in June of this year!). Here is a lecture on crows I found…check it out…

I record the Nature series on PBS and I watched one I thought you might be interested in, A Murder of Crows.

You can watch the full episode here.

A few weeks ago I posted about Make a Joyful Noise written by Charles de Lint (read post here). I enthusiastically shared two of my favorite literary characters, the Crow Girls, Maida and Zia. This story is not available to purchase anymore but since I had a copy I thought I would ask the author if I could record it and post it on Corvid Corner to allow other crow lovers to enjoy it as well. Much to my surprise, he said I could! =)

And without further delay here is the story…(don’t forget to bookmark it!).

A friend made the following graphic to go with this audio recording. Thank you.

Please do NOT redistribute this recording elsewhere or re-post it on other sites. If you enjoy it and wish to share it you can send a link to this post to as many people as you would like. We want to be respectful of copyright laws and issues and not take advantage of the kindness of Charles de Lint in allowing me to share this here. =) Thank you and enjoy!

Update 1/10/2011: I started a new post for more information on these two beautiful characters, the Crow Girls here. Perhaps together we corvid lovers can find all references to them and share them with the world.

The Crow and the Pitcher, originally uploaded by AnnaleeBlysse.

Scientists believe the fable of the crow and the pitcher might have been fairly accurate given the new research showing rooks using rocks to raise the level of water where a worm resided… to bring the worm up to their level. ((http://www.telegraph.co.uk/earth/wildlife/5983953/Aesops-fable-is-true-shows-crow-study.html))

They are such incredibly intelligent birds. The other animal who showed fluid mechanics was the orangutan. I will bet corvids are just as smart if not smarter than many of the primates.

You can read more about the studies here.

These white-necked ravens are hungry and clever. They want some of that food! Watch this video and see how clever they are in their pursuit of food.

You can’t blame them for trying!